Worldbuilding – how much of it do you need, and when?

I've talked about worldbuilding here before, but one thing we should discuss before any of that is the amount of worldbuilding needed for your story.

A disclaimer before we get started: This article is based on my experience writing a fantasy series, and what I've discussed here won't necessarily apply to every writer or every story.

This article was inspired by this image which was shared in several writing communities: 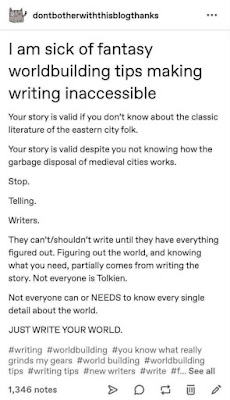 And I basically agree with what this says.

In my opinion, the issue mainly comes with many those who give writing advise putting the cart before the horse. Sometimes, they're just telling you how to do the worldbuilding, expecting you to figure out the context and apply it appropriately, which can come off as putting too much pressure on writers. Sometimes, it's just worldbuilding tips being shared, or ideas, which can also intimidate someone considering getting into worldbuilding for the first time.

The thing is, worldbuilding simply can't happen in a vacuum. At least, I know I can't do it. It simply becomes super tedious extremely fast if I have nothing to anchor me to in the world I'm writing about.

For example, say you decide you need a language (one of my favourite aspects to tackle, you may have noticed already).

How do you create it? You could go ahead and create a language in a vacuum, but the thing is, you will inevitably end up with a language that has a certain character in terms of sound. Then you have to think of the kind of thing these people talk about. You could go with basic phrases that you assume everyone will need to use, but if you have no context to ground you, you'll start floundering fairly quickly, because you simply don't know which words you need to create.

If you succeed and create a workable conlang, good for you, but you've already added a constraint to your story before you've written any of it. You've already decided a lot about how these people view the world, and now, your story will have to adhere to it.

Especially if you've decided to finish your worldbuilding before you start.

This applies to any aspect of a world that you decide to build. For example:

You can try this yourself with any other aspect of worldbuilding. Go ahead and try it, it's a fun exercise. Everything – and by that I mean everything you create, every detail you specify, adds another constraint to the story that you want to tell.

It may reach a point where trying to fit a story into this world just becomes impossible.

My recommended solution: don't try to do it all at once, and you don't need to figure out everything.

Once you start writing, you can do a lot of worldbuilding on the fly. You don't have to know everything about the world you're writing about, because

For example, when I started writing my fantasy series, I knew I'd be using a conlang, I knew I wanted it set in a fantasy setting, and I had a basic idea of the general story themes and the sort of magic system I needed. Everything else – the cultures, the maps, all the calculations about the planet's orbit, the languages – all of that came  afterwards.

I mean, if I had tried to do it all at once, I would have been bored and abandoned it halfway.

You see, the biggest advantage in fantasy as a genre is just how much of the world is under your control, at least in my opinion. You control how strong the gravity is. You control the animals that exist in your universe. Perhaps more relevant to storytelling, you control social norms. You design the systems that your MC may have to fight. If you do your worldbuilding as you go, you can adjust your world to suit the story you want to tell. It's also possible to tweak both the story and the world until you end up with a story that you like.

This process can also be iterative. It certainly was for me. I went three to four rewrites with placeholder names for my characters. While I don't recommend you doing the same (it was probably a stupid idea and I probably need to learn how to plan), iterative worldbuilding gives you the chance to figure out how the elements work together and work on the elements that you really need for your story.

Another advantage to this approach is you don't force yourself to do more worldbuilding than necessary, so you can save some time and effort that way. Or you can do the extra worldbuilding because you enjoy it. At least, the choice is yours.

Also, worldbuilding is a really good cure for writer's block for me. Might not work for everyone. Please follow your muse's advice.

In short, it all boils down to:

Please let me know what you think in the comments. I would love to discuss this topic further.

Happy Writing, and see you next time!

Worldbuilding – how much of it do you need, and when?

I've talked about worldbuilding here before, but one thing we should discuss before any of that is the amount of worldbuilding needed f...